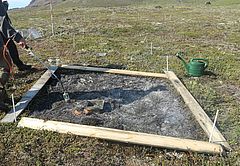 Simulation of fire with a butane-gas burner.

One of the most pressing research needs is the effect of arctic fires on the soil microbiome in permafrost soil as fires are increasing in the permafrost region due to climate change. Also concerning our study site in NE China, a large fire impacted the area in 1987 (we still found traces in the upland soil; Ramm et al. 2022). Specifically, it is unclear in how far weak fires cause different responses than strong fires, altough fire intensity varies greatly.

Thus, within a co-operation with Per Ambus and the Department of Geosciences and Natural Resource Management (University of Copenhagen), a fire experiment and DNA sampling for qPCR analysis were conducted on Disko Island, Greenland. The low-intensity fire induced a maxiumum of 60 °C, the high-intensity fire a maximum of 190 °C in 5 cm soil depth.

Our results show how important the differentiation of fire intensities will be for correctly predicting future effects of large arctic fires.